Eri Hertiawan appointed a member of the SIAC Court of Arbitration

We are delighted to announce that the Singapore International Arbitration Center (SIAC) has appointed the co-head of our Disputes Resolution practice group, Mr. Eri Hertiawan S.H., LL.M., MCIArb, to be a member of the SIAC Court of Arbitration (SIAC Court). Eri is the first and only Indonesian advocate appointed to be a member of the SIAC Court. SIAC also invites Eri to join the prestigious list of SIAC arbitrators, which places him in a group of 33 of the most eminent arbitration specialists in the world.

Eri is renowned for his comprehensive legal expertise, with specialist knowledge in shipping, aviation and competition law, as well as commercial, and criminal matters. He has acted as counsel in many arbitration cases, handling matters for international and domestic clients including state-owned enterprises.

As a member of the SIAC Court, Eri will take part in the court's essential role of exercising judicial supervision over arbitration proceedings and ensuring that arbitration proceedings comply with the SIAC Rules. The SIAC Court's primary responsibilities also include appointing arbitrators as well as deciding on any challenges made against them, and assisting parties and arbitrators to overcome procedural obstacles.

Of his appointment, Eri says "SIAC is a premier international arbitral institution, and it is an honour to serve the SIAC Court. I have the greatest respect for my fellow court members and look forward to supporting SIAC's ongoing development as a leading force for dispute resolution in the region, particularly in Southeast Asia." 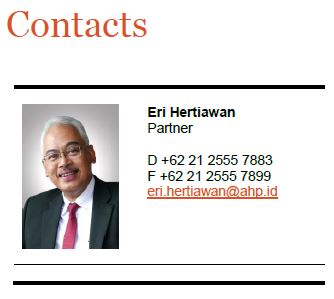