Towards the end of 2019, the Constitutional Court handed down a startling decision declaring certain articles in Law No. 42 of 1999 on Fiduciary Security (“Fiducia Law“) on creditor’s power to enforce security to be conditionally unconstitutional. The case in the decision involved an application for judicial review by a debtor who claimed that they have suffered losses as a result of the unscrupulous repossession of a security by a multi finance company.

The provisions in question are Articles 15(2) and (3). Articles 15(2) provides that a fiduciary certificate has enforcement powers equivalent to a final and binding court decision. Meanwhile, Article 15(3) provides that if a debtor is in default, the fiducia grantee (e.g. the creditor or security agent, as the case may be) has the right to sell the fiducia security object on its own powers.

Significance of the Decision to Existing Practice

The impact of the decision can be categorised broadly into two subjects:

As mentioned in the beginning of this update, the case in the heart of the decision stems from a forced repossession by an unscrupulous creditor. But instead of supervising creditors, the Constitutional Court took the provisions of the Fiducia Law literally as if it condones creditor to take the law unto its own hands and use force to repossess and sell the secured objects.

In reality, unilateral repossession in enforcement only happens if the debtor/fiducia grantor agrees to surrender the secured object; otherwise a forced repossession by the creditor itself is unlawful. But it should, perhaps, be addressed not by nullifying the provisions in the Fiducia Law, but instead by disciplining creditors that resort to using force.

The Constitutional Court decision at least seems to cosmetically sends a different message, namely that any enforcement must go through the courts. In many other jurisdictions, to ensure efficient enforcement and therefore accessible affordable pricing of credit, secured creditors are given the power to enforce without a court order (i.e. by applying for a writ or warrant from the court office). But this power is balanced with protection for debtors under equity, common law and the enforcement process itself.

Here, the Constitutional Court however takes the opposite view by requiring court intervention even when there is no wrongdoing. This may not be a real problem had Indonesia has an efficient court system, but unfortunately Indonesia’s court system remains plagued by unpredictability, high cost and inefficiency.

The above rational extends to a default declaration. Assessing default in a lending/borrowing situation is relatively straightforward; if a debt is not paid when due and payable, default occurs. This tenet is clear in Indonesian law as the civil code does not require any demand to be served for performance of an obligation that remains unperformed with the lapse of time. In effect, the decision offers an avenue for delinquent debtors to more easily frustrate the enforcement process. In an environment where enforcement is already complex and time consuming, the decision may not be a wise choice as it may lead to credit becoming less accessible. Due to this, creditors may be more incentivised to enforce security through a bankruptcy process as it should not be affected by a default declaration.

As the decision renders a fiducia certificate without any enforcement powers failing the agreement from the debtor or a court decision, it remains to be seen how a public auction would be affected. Under prevailing regulation, a public auction for a fiducia security object can be performed as long as the creditor can submit, among others, evidence that the debtor is in default (i.e. a warning letter). Now, it is unclear whether the state auction office would also require evidence of the debtor’s agreement, and even if the debtor has voluntarily surrendered the secured object, would the state auction office require a court decision still, which was the case in the past?

Though we have yet to see this decision in practice, it has to be acknowledged that this decision is a step backward as it has made it more difficult for a creditor to enforce against a secured property. An even bigger issue is whether courts would apply the same principles to other types of security (e.g. mortgage (hak tanggungan), pledge, hipotek, etc.) going forward. 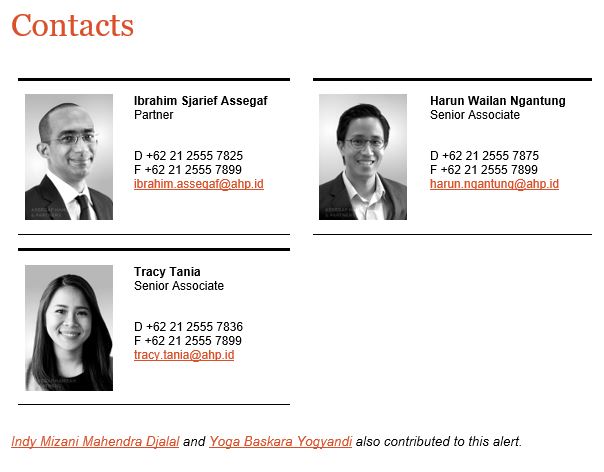