As part of its 10th economic reform package (and possibly the most significant to date), the Government has announced that it will revise the Negative Investment List (Daftar Investasi Negatif / “DNI”) so as to permit foreign direct investment (“FDI”) for the first time in a number of sectors and increase FDI limits in others. The proposed changes are clearly influenced by the need to attract greater FDI inflows so as to counter the current economic slowdown and to boost the country’s competitiveness in the Asean Economic Community (“AEC”). No doubt the Government also has its eye on the prospect of stiff competition from Trans-Pacific Partnership (“TPP”) countries such as Vietnam.

In an official release issued on Thursday (Feb 11), the Coordinating Ministry for the Economy outlined the various changes that will be instituted, and explained the necessity for these changes. The Ministry said that they were required to, among other things, break up economic concentrations that only served to benefit vested interests, reduce the cost of such things as medicines and medical equipment, effectively respond to greater competition as a member of the AEC and enhance the competitiveness of domestic industry, both at home and overseas.

As a Presidential Regulation implementing the changes has yet to be issued, we need to stress that it is not yet clear whether they are definitive or whether there continues to be room for further revisions.

It is further proposed that the maximum foreign ownership limit in the following sectors be increased:

In addition, the following sectors, which are at present completely off-limits to FDI (100% closed), will be opened up:

Besides increases in FDI limits and the opening up of new sectors to FDI, the Government also plans to further streamline the investment process. For example, recommendations from the relevant governmental authorities will no longer be required for FDI in the hotel sector (for non-starred and one- and two-star hotels). In addition, a number of classifications in the DNI have been combined so as to make it more manageable and comprehensible, including the consolidation of building construction, building development and building repair as “Construction Services.”

3. What exactly is the DNI?

The DNI sets out a long list of business sectors that are either completely closed, completely open or conditionally open to foreign investment. This list of business sectors is based on the comprehensive classification of sectors set out in the 2009 Indonesian Business Sector Classifications (“KBLI”), drawn up by the Central Statistics Bureau. However, the classifications are very general in nature, with no definitions being given. The current DNI is incorporated in Presidential Regulation No. 39 of 2014.

Despite the relaxations outlined above, there continue to be various other restrictions on FDI in practice. For example, the Investment Coordinating Board (“BKPM”) requires a minimum investment of USD 300 thousand, rising to USD 1 million within one year (depending on what is stated in the BKPM’s preliminary approval), for the setting up of a foreign direct investment company, which is a prerequisite for an overseas investor wishing to establish a venture in Indonesia (although portfolio investments by foreign investors in Indonesian listed companies are not subject to restriction). Consequently, there is no question of foreigners flooding into Bali, for example, to snap up small-scale restaurants and hotels.

Further, the BKPM has a great deal of discretion in interpreting which precise business activities come within the ambit of each business line listed in the DNI. Even if a particular business is not specifically mentioned in the DNI (which one would therefore expect to be 100% open to foreign investment), the BKPM may still decide that that business in question comes within the scope of another sector. For example, engineering procurement (EPC) services are not referred to in the current DNI, and should therefore, at first sight, be 100% open to FDI. However, this is not necessarily the case as there is nothing to stop the BKPM from determining that they come within the ambit of, say, construction consultancy services (currently capped at 55%). Such discretion is possible due to the lack of definition of business sectors in the KBLI, as mentioned in section 3 above. Thus, potential investors need to test the waters first by consulting with the BKPM before taking the plunge.

In addition, various sectors are reserved to Indonesia SMEs, or minimum investment thresholds are imposed below which FDI is not permitted. As a developing nation, Indonesia obviously has a strong interest in nurturing its SME sector, something that the Government has stressed it will continue to do.

The changes announced by the Coordinating Ministry of the Economy are to be welcomed, not least the simplification of business lines in the DNI, which has traditionally been difficult to get to grips with due to its complexity.

The Coordinating Ministry for the Economy stressed in its release that it remains committed to protecting and nurturing SMEs. This is also to be welcomed as the country’s small enterprises have long faced significant hurdles in attempting to develop their businesses, such as lack of access to financing, and underdeveloped management and marketing skills. However, while this sector needs protection, it is also incumbent on government to do more to ensure that real assistance and mentoring is provided on the ground. 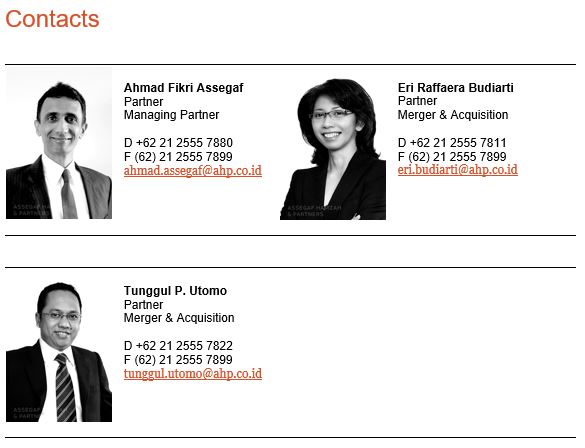