In recognition of the reality that a taxpayer’s disclosures made in the context of the Tax Amnesty could reveal that they are in fact the controlling shareholder of a public company, thus automatically triggering the need for a mandatory tender offer under the provisions of Capital Markets & Financial Institutions Supervisory Board Rule IX.H.1,i the Financial Services Authority (“OJK“) has issued a Circularii to exempt an amnesty participant from the need to conduct a tender offer in the case of a (de facto) acquisition that becomes apparent as a result of Tax Amnesty disclosures.

Further, a public company that becomes aware that it has a new controlling shareholder as a result of disclosures made under the Tax Amnesty is exempted from the requirement to disclose material information and facts under OJK Regulation No. 31/POJK.04/2015.iii

In order to avail of the above exemptions, the taxpayer must submit the following documents and information to the OJK:

The Circular’s requirement that a photocopy of the Tax Amnesty Certificate issued by the Tax Office be provided by the taxpayer to the OJK, as mentioned in point (a) above, has given rise to some concerns about confidentiality as such certificate will contain all tax-related information that has been disclosed by the taxpayer for the purpose of participating in the amnesty. However, it should be remembered in this regard that while the OJK is not specifically mentioned in the confidentiality provisions of the Tax Amnesty Law,iv the legislation nevertheless contains a blanket prohibition on the divulging of any amnesty-related information to unauthorized third parties (Article 21(2)), which prohibition is backed up by the threat of a term of imprisonment of up to five years (Article 23). We believe, therefore, that the confidentiality issue is no more pronounced in the case of the OJK than in the case of other government institutions in possession of amnesty-related taxpayer information.

The exemptions are available for a limited period only, namely, from 2 September 2016 until the elapse of 20 working days counting from 31 March 2017.

In our Client Update published on 1 July 2016, we stressed the need for close coordination among government departments so as to ensure the success of the Tax Amnesty, given the serious revenue shortfall currently facing the government. Unfortunately, such coordination appears to have been lacking, with many of the regulations and other instruments required for the amnesty’s implementation only being issued long after its introduction on 18 July 2016. Further, many issues have emerged since that time that appear not to have been considered in advance, as demonstrated by this OJK Circular. These failings, we believe, have done little to inspire confidence among prospective amnesty participants, thereby contributing to the low uptake rate to date. According to the Ministry of Finance, as of 14 September 2016, Rp 21 trillion in untaxed overseas funds had been declared with a view to repatriation, a mere drop in the ocean compared to the government’s original target of Rp 1,000 trillion. With the discounted redemption fine of 2% for repatriated funds only being available until 30 September 2016 (after which the fine increases progressively to 3% and then 5%), it is becoming increasingly apparent that the government will need to work harder than ever to convince prospective participants with funds parked overseas that it is in their best interests to take part in the amnesty. 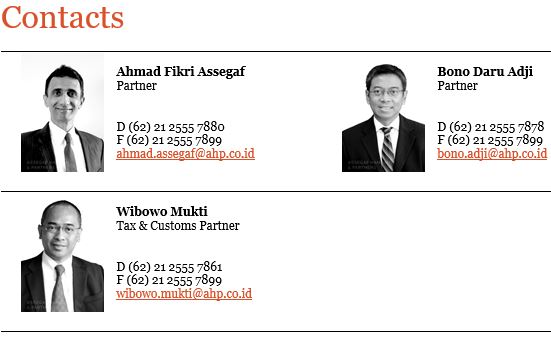