A lot has happened in the past month or so, which perhaps can be said to set the tone for Indonesia for the remainder of 2019. As the public geared up towards President Jokowi’s second term, Indonesia introduced several noteworthy regulations, ranging from tax incentives for electronic vehicle to introduction of a new listing board in the Indonesia Stock Exchange (“IDX”).

Below we summarise some of the key legal developments that occurred in Indonesia in the past month alone, highlighting their features and intended impact to the legal ecosystem.

Capital Market â€“ Introduction of the Accelerated Board

The Indonesian government recently introduced the new Accelerated Board1 at the IDX in July 2019. Unlike the Main and Development Boards, which have long been established, the Accelerated Board will cater to market demand to allow startups with small or medium-sized asset to access capital through the stock exchange. This new IDX regulation is procured to be in line with the regulation issued earlier by the Financial Services Authority on registration statements for public offering by issuer with small or medium-sized asset2, and provides certain leniencies to these issuers.

Based on the Accelerated Board listing regulation, eligible companies are companies whose assets are less than IDR 50 billion (small-scale enterprises) or between IDR 50 billion and IDR 250 billion (medium-scale enterprises). Besides limiting the total asset value, there is no minimum period requirement for operational activities as long as it has recorded revenues in its latest financial statements with a projection to book profit in the sixth year as of the listing date (compared to the one-year allowance for companies listed in the Main Board). Further, there is no net tangible assets requirements and the minimum number of shareholders is only 300 shareholders. The minimum free float for the companies listed at the Accelerated Board is at least 20% of its paid-up capital.

To balance the leniency under this regulation, the IDX requires the company to disclose its controller, as well as imposing a lock-up period of six months as of the listing date to its controlling shareholders. This regulation also allows a company that has been listed on the Accelerated Board to move to the Development Board or to the Main Board based on the IDX’s discretion or its own initiation.

The IDX stated that several companies, especially those domiciling outside of Jakarta, have expressed their interest to list in the Accelerated Board. As of the date of this alert, the IDX, together with other stakeholders (particularly, securities companies) are currently preparing the trading mechanism and infrastructure to support the Accelerated Board once it is up and running.

In an effort to expedite electronic processing in the judiciary, the Supreme Court recently enacted a new regulation on electronic litigation,3 which was followed by its implementing guidance.4 The Supreme Court regulation covers the administration and hearings of civil proceeding, civil religious proceeding and administrative proceeding. Criminal cases are notably absent from the list of cases eligible for e-litigation.

Indeed, this regulation and decree must be appreciated as it is a major effort and undertaking by the government not only in improving the conduct of civil proceeding, but also to catch-up with other countries who have implemented the e-judicial system. Further, while it may seem extensive, it is important to note that the process is voluntary.

One of the main topics dominating conversation lately is Jakarta’s Air Quality Index, which remained in the â€˜unhealthy’ and â€˜very unhealthy’ category for several weeks. Indisputably, this is caused by vehicles emission. As a result, President Jokowi has called on the Jakarta regional government to switch to electric vehicle for mass transportation in order to reduce emission of air pollutants.

Although the government still has to issue a ministerial-level operative regulation, which must be issued within a year as of the enactment of this regulation, these incentives are a positive move towards the right direction.

Competition â€“ KPPU starts taking Actions against Past Transactions: Eight Companies may be Subject to a Maximum Fine of IDR 25 Billion for Notification Failure

On 12 August 2019, the Indonesian Competition Commission (“KPPU”) announced 12 acquisitions made by 8 companies that failed to be notified to the KPPU within the specified timeframe. This announcement was the result of a systematic scrutiny by the KPPU that started in 2018, of looking into transactions from 2010 that were supposed to be notified to the KPPU but failed to do so. KPPU said this was the first announcement of many more to come. Thus, we expect that more names will be released following this first warning.

Guntur Syahputra Saragih, one of the KPPU Commissioners, explained that the KPPU has prepared sufficient resources to examine past transactions that have not been notified to the KPPU. Guntur emphasised that this matter has become a very important issue for the KPPU.

The announcement contained names of large and publicly listed companies, where the total combined assets or revenues of the merged entity exceeds IDR 2.5 trillion or IDR 5 trillion. Transactions resulting in the above threshold must be notified to the KPPU within 30 business days. After the 30-business day period, the KPPU may impose a fine of IDR 1 billion per day of delay, with a maximum fine of IDR 25 billion.

In addition, the value of the 12 transactions mentioned in the announcement varied from IDR 90 million to IDR 2 trillion. However, the KPPU highlighted that the maximum fine imposed against the business may well be beyond the value of the transaction itself. Meanwhile, the period of delay of the notification ranged from 11 months to 5 years. 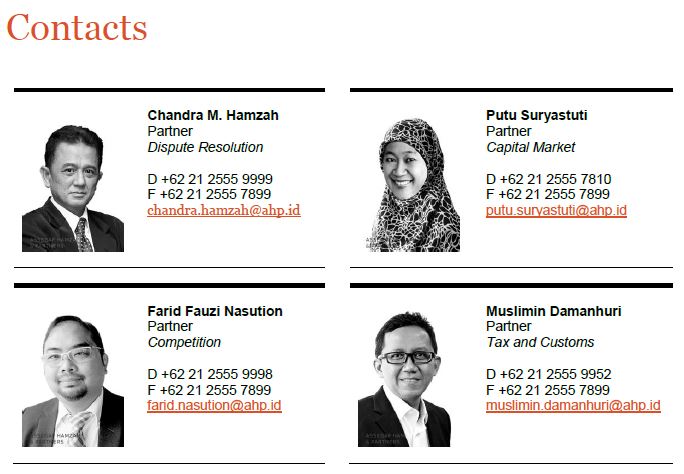