After widespread discussion in the media and property circles over the past few months, the Government has finally issued a much anticipated new regulation on property ownership rights for foreign citizens in Indonesia. The new regulation (Government Regulation No. 103 of 2015 on the Ownership of Residential Homes or Housing by Foreign Citizens Resident in Indonesia (the “New Regulation”), which came into force on 28 December 2015, revokes and supersedes the previous regulation governing the issue, Government Regulation No. 41 of 1996 (the “Old Regulation”).

Despite expectations in some quarters that real change was in the offing, the New Regulation fails to significantly expand the property rights already extended to foreign citizens under the Old Regulation, although it does provide greater clarity as regards such rights, as well as inheritance and property rights in transnational marriages where one of the parties is an Indonesian national.

2. Difficulty in According Expanded Property Rights to Foreigners

Even if the country’s politicians and people were agreed on the desirability of expanding property rights for foreigners, there is one major obstacle standing in the way, namely, Law No. 5 of 1960 on Fundamental Agrarian Principles (“Agrarian Law”).To grasp why this particular piece of legislation represents such an obstacle, we need to understand the background to its enactment.

Due to the way in which the Netherlands Indies state1 developed gradually and expanded its jurisdiction over the Indonesian archipelago in a piecemeal fashion over the course of some 350 years, the body of laws inherited by the independent Indonesian state was complex and fragmented along ethnic and regional lines (a situation that continues to date in many areas of the law). Against this background, the enactment of the Agrarian Law was widely hailed as the first example of successful “legal unification” (meaning that the legislation applies to the entire population and all areas of the country) to be achieved since the Declaration of Independence in 1945. The severe restrictions imposed by the Agrarian Law on the ownership of property by non-Indonesians need to be seen against a backdrop of resentment against the perceived evils of the colonial land ownership system and the heightened tension then prevailing between Indonesia and the Netherlands, Indonesia’s former colonial power.

Thus, almost on a par with the 1945 Constitution, the Agrarian Law occupies a special place in Indonesian legal history and in the hearts of Indonesian nationalists in general. Consequently, it has proven itself almost untouchable in the past. However, if any meaningful change as regards the property ownership rights of non-Indonesians is to be achieved, it is axiomatic that the Agrarian Law will need to be amended first, as explained in section 2.d below.

2.b. Land Titles Established by the Agrarian Law

The Agrarian Law establishes seven principal land titles, but only four of these are of relevance for present purposes. In descending order of strength and security, these four titles are as follows:

Under the Agrarian Law, Hak Pakai is the strongest title that a non-Indonesian individual may acquire. It may be granted both over state land and Hak Milik land – in effect, the Hak Pakai (the inferior title) “piggybacks” on the Hak Milik (the superior title). It confers the right to use the land and/or harvest produce on it. It is temporary in nature, and, upon expiration, any buildings constructed on the land must be disassembled. Thus, it may be categorized as a weak title and, accordingly, is generally seen as being unattractive.

As a Government Regulation, the New Regulation is lower in the legislative hierarchy than the Agrarian Law and so its provisions must accord with/not diverge from what is contained in the  Agrarian Law, including the prohibition on foreign citizens and most legal entities (such as private companies) from holding Hak Milik title.

3. Ownership of Residential Houses and Apartments by Non-Indonesians

A non-Indonesian may own a residential house constructed on Hak Pakai granted over state land or over freehold land (which may only be owned by an Indonesian citizen or selected legal entity, as explained in section 2.b above). In the case of Hak Pakai over Hak Milik land, the foreign citizen and the holder of the Hak Milik title need to first negotiate and enter into an agreement on the use of the land in question, which agreement must then be set out in a notarial deed drawn by an authorized conveyancer of land titles (pejabat pembuat akta tanah).

Hak Pakai for a residential house has a maximum period of validity of 80 years (30 years, with the possibility of a 20-year extension and renewal for another 30 years – under the Old Regulation, the maximum period was 50 years, including the renewal and extension periods). However, in the case of Hak Pakai over freehold land, the period of validity will depend on the agreement between the foreign citizen and the Hak Milik holder, but it must not exceed a period of 80 years, including the extension and renewal periods.

The major drawback of owning a residential house based on Hak Pakai is the temporary nature of the title. Extension and renewal are administrative acts and there is no guarantee that they will be granted. Upon final expiration of the Hak Pakai, any buildings constructed on the Hak Pakai land must be disassembled.

Furthermore, if a foreign citizen relinquishes Indonesian residency during the term of the Hak Pakai, he/she is required to transfer the ownership of the residential house and the Hak Pakai title to an eligible third party within one year of leaving the country.

While the New Regulation is silent as to what precisely is meant by “no longer resident in Indonesia,” we believe that this condition will be satisfied by expiry of the foreign citizen’s residency permit.

As regards apartment units, ownership is granted under strata title, the validity of which will be dependent on the validity of the underlying Hak Pakai (30 years, with the possibility of a 20-year extension and renewal for another 30 years, giving a maximum period of validity of 80 years). Thus, upon the final expiry of the Hak Pakai, the strata title will also expire.

As in the case of a residential house constructed on Hak Pakai land, there is no guarantee that the Hak Pakai title will be extended or renewed and, if we go by the letter of the law, the apartment building will need to be demolished upon its final expiry. While this is obviously difficult to envisage, it is nevertheless how the law stands at the moment. Thus, it is rare indeed for apartment complexes to be constructed on Hak Pakai land, thereby making it difficult for non-Indonesians to find the type of apartments that they are actually entitled to purchase and own under the New Regulation.

Unlike the Old Regulation, the New Regulation specifically provides that a residential house or apartment constructed on Hak Pakai land is inheritable provided that the heir is lawfully resident in Indonesia or is an Indonesian citizen.

One of the key complaints against the Agrarian Law on the part of non-Indonesians and their Indonesian spouses is that article 21(3) of the legislation in many cases operates to effectively deprive the Indonesian spouse of their right to acquire Hak Milik land. This is because article 21(3), among other things, specifically prohibits the acquisition of Hak Milik by non-Indonesians through marriage. This prohibition is further reinforced by article 26(2).

In order to understand why Indonesian spouses end up being deprived of their rights in this respect, it may be useful to first explain the concept of marital property. Under article 35 of Law No 1 of 2004 on Marriage (the “Marriage Law”), any assets acquired during a marriage (other than by way of inheritance or gift) become part of the couple’s combined marital property, i.e., the two spouses have equal ownership of the assets. Thus, any Hak Milik land purchased during the course of the marriage by the Indonesian spouse also becomes part of the marital property, thereby giving the non-Indonesian spouse a share in the Hak Milik, something that is prohibited by the Agrarian Law, which stipulates that only Indonesian citizens have the right to hold this title.

In such cases, the Agrarian Law provides that the Hak Milik title must either be converted into Hak Pakai (which is a significantly weaker title) through an application to the National Land Agency (“BPN”), or be assigned within one year to a party that is eligible to hold Hak Milik under the Agrarian Law. If not, the land will be forfeit to the state.

The only way this prohibition can be circumvented is to enter into a pre-nuptial agreement, whereby the prospective parties to the marriage agree that the Indonesian spouse’s Hak Milik property will be excluded from the marital property. The validity of pre-nups is specifically recognized by article 29(1) of the Marriage Law. However, it should be noted that Indonesian law does not recognize the validity of post-nuptial agreements.

While this was the situation that also prevailed prior to the New Regulation, it was not specifically spelled out in the Old Regulation, resulting in confusion and difficulties for transnational couples who actually went to the trouble of preparing pre-nups. This was because many notaries, conveyancing officials and even BPN offices were unaware of the relevant rules. By contrast, the New Regulation makes it clear that a pre-nup which specifically excludes Hak Milik from the marital property exempts the Indonesian spouse from the exigencies of Agrarian Law articles 21(3) and 26(2).

The New Regulation also stipulates that the prenuptial agreement must be incorporated in a notarial deed.

Despite the hallowed status of the Agrarian Law among both traditional legal and nationalist circles, there is widespread acknowledgement that Indonesia’s land law regime is in a mess. According to BPN data from 2014,2 a total of 650 regulations were issued up to the end of that year based on the Agrarian Law, of which 524 have been repealed, leaving 126 in effect (the BPN believes that only some 20 regulations are necessary for a well-organized and effective land law regime). Such a plethora of regulations has resulted in widespread overlapping, lack of synchronization and general confusion. The situation as regards land registration also continues to be chaotic, with disputes over dubious title certificates (forged or illegally altered, or corruptly issued by BPN offices) regularly coming before the courts. Further, the Agrarian Law fails to deal with various land law issues that have emerged since its enactment some 55 years ago.

A Bill to amend the Agrarian Law is currently under discussion at the committee stage in the House of Representatives (DPR). However, the draft, as it is framed at the moment, primarily clarifies various obscure provisions of the legislation that have given rise to multiple interpretations down the years, and contains little that is new at the conceptual level, including as regards property ownership rights for non-Indonesians.

While the New Regulation may be broadly welcomed for its clarification of certain provisions of the Old Regulation, it contains little that is new. As a result of the country’s history of colonialism, entrenched antipathy to land ownership by foreigners means that liberalization continues to be regarded as undesirable, to say the least, by many in the political, legal and academic elite, not to mention the public at large, and the various arguments highlighting how much the country could gain by opening up the market generally fall on deaf ears. Thus, we believe that it is unrealistic to expect meaningful change on land ownership rights for non-Indonesians any time soon, even if the Agrarian Law is amended. 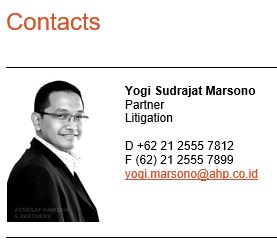