According to MOTR 32/2016, an unscheduled public transportation service is:

“a transportation service by public passenger car or bus within a certain area or from one place to another place, having a specific point of departure and specific destination but without a specific route and timetable.”

In order to obtain the license, a public transportation company is required to fulfil the following requirements:

Moreover, a transportation app service provider is NOT allowed to conduct the following activities, which are reserved solely for licensed unscheduled public transportation companies:

In addition, MOTR 32/2016 imposes various reporting obligations on ATSPs, including the furnishing of:

According to Government Regulation No. 14 of 1993 on Road Transportation (an implementing regulation for Law No. 22 of 2009 on Road Traffic and Transportation), the transportation of people using a public vehicle may only be conducted by bus or car.  In a similar vein, MOTR 32/2016 also expressly provides that all categories of public transportation services may only be provided by means of bus or car.  While MOTR 32/2016 is clearly consistent with the higher regulations, it leaves open the question of whether motorcycle transportation may be considered “public transportation.” This is particularly noteworthy as many ATSPs use motorcycles in their operations.  However, it has been reported in the media that the government will regulate such operations by means of a separate regulation to be issued later this year.

It will also be interesting to see how the ATSPs react to the new restrictions imposed upon them.  Key among the concerns are the ability to collect fares and to share fees among ATSP drivers.

Whatever the challenges, at the very least the new rules provide more clarity on the rules of the game.

MOTR 32/2016 appears to create a more level playing field between conventional and app-based services by imposing equal licensing requirements on non-taxi transportation service providers.  However, the definition of “transportation vehicle” is restricted to cars and buses; there remains a vacuum with regard to motorcycles, which is significant given that the ATSP industry in Indonesia has been dominated by motorcycles. As we mentioned earlier, it is expected that the government will issue a separate regulation governing motorcycles later this year.

On a more general note, the growth of the app-based transportation sector in Indonesia has been one of the great economic success stories of recent years. The sector’s extraordinary development has once again demonstrated the power of disruptive technology to spur economic growth and provide better services to the public, and how the rapid pace of technological development can potentially leave government, legislators and traditional businesses far behind. The fact that this particular business has thrived in the absence of government intervention clearly demonstrates the economic benefits of light-touch government regulation. 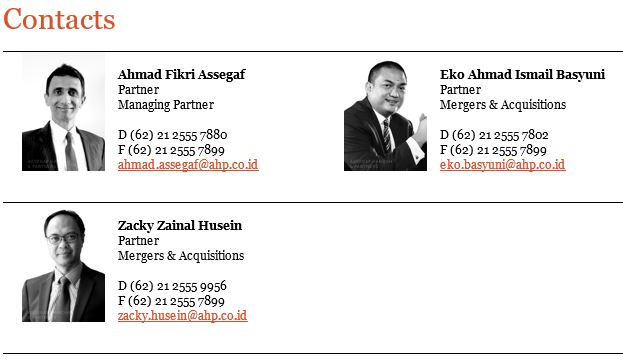