Another Setback for Secured Creditors: A New Supreme Court Decree on Bankruptcy/PKPU

Following the disappointing decision by the Constitutional Court (click here to read our update on this topic), secured creditors suffer another setback as a result of a decree1 issued by the Chairman of the Supreme Court. The decree provides a detailed guideline and procedure for bankruptcy and suspension of debt payment (Penundaan Kewajiban Pembayaran Utang or “PKPU“) proceedings, starting from the registration of petition, to the process post-issuance of the court decision.

While this decree is neither a law nor a regulation, it still serves as an instruction and guidance for all judges and registrars in Indonesia’s commercial courts. Further, as it is not a part of the regulatory hierarchy in Indonesia, it should not introduce any new norms and contains only implementing or technical provisions for existing laws and regulations. But while it refers to, and generally does not deviate from the procedures stipulated under the Bankruptcy Law (Law No. 37 of 2004), this decree introduces new norms that are not in the Bankruptcy Law, specifically on limitation of secured creditors’ right to file a PKPU petition.

The decree stipulates that only unsecured creditors can file a PKPU petition without specifying the legal basis for this new norm. Granted, there are continuing debate on the ability of creditors generally to file for a PKPU. In view of this, some argue that the restriction on secured creditors to file PKPU is an attempt to adjust the current practice to be in line with the working draft of amendments to the Bankruptcy Law. The draft envisages that PKPU petition should be filed only by debtors as only they know their financial condition, i.e. whether they would be able to repay their debt. Although this idea is unfortunate as it is futile to limit secured creditor’s action to bankruptcy or enforcement of security, the Supreme Court decree seems to endorse this point of view.

Some also suspect that the Supreme Court views that a PKPU process should have no effect on claims secured by a pledge, fiducia, mortgage (hak tanggungan), hypothec or any other security right. Indeed, secured creditors still have the right to enforce a secured object after the conclusion of the PKPU process. This argument may not be entirely correct. Instead, secured creditors often play an important role in PKPU because the Bankruptcy Law provides a voting right to secured creditors in its own class, separate from unsecured creditors, on a settlement plan proposed by the debtor.

Secured creditors are often more involved in the PKPU process, rather than in the bankruptcy process. Indeed, a secured creditor is unlikely to file a bankruptcy petition and would prefer to file a PKPU petition as it opens a path to restructure the debt and to keep the borrower company in operation. The rationale for doing so is that the securities enforcement process in Indonesia is likely to be frustrating and time consuming for them.

Other Points of Interest

Besides the controversial provision detailed above, the decree affirms a mechanism for the filing of a bankruptcy petition against a bankrupt company or individual’s debtor by the receiver of such company/individual. This is not a new provision as it merely echoes the obligation for receivers to represent the bankrupt estate, even in filing a bankruptcy petition. In line with Article 69 of the Bankruptcy Law, which requires the receiver to first obtain approval from the supervisory judge, the filing of the petition must be approved by the supervisory judge.

In addition, the decree simplifies the bankruptcy and PKPU proceedings. Submission of reply (replik), rejoinder, intervention and counterclaim are no longer required in both proceedings, and as a result, it should now be possible for proceedings to be concluded within the 20 calendar day-period from the submission of the petition as stipulated under the law.

Lastly, the decree changes the administrative requirements for bankruptcy and PKPU petitions. Now, the petitioner no longer needs to attach their Company Registration Certificate (Tanda Daftar Perusahaan) to the application. The decree also removes the possibility for creditors to use creditors data obtained from the website of the Financial Services Authority (OJK) in order to prove that the debtor has more than one creditor. In this respect, the decree affirms the current practice and emphasises that although the existence of ‘other creditors’ should be proven in a simple manner, there must be sufficient and proper evidence to prove it, for instance by way of presenting agreements, invoices or even presenting such other creditors before the court.

Many lenders lending into Indonesia often view the PKPU process as a viable alternative to compel the borrower to “sit at a negotiation table” to restructure the debt. As such, the enactment of the decree is disappointing, to say the least. Instead of improving the lending climate in Indonesia, it introduces uncertainty for lenders. For now, it remains to be seen how the decree will apply in practice, but it is likely to present another hurdle for lenders in achieving a favourable outcome. 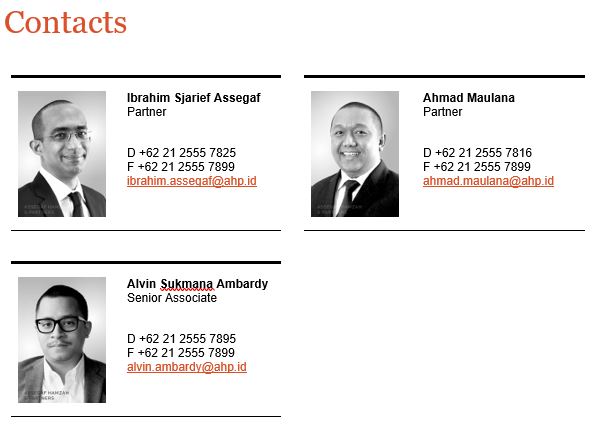