With the intention to encourage transparency, provide legal certainty and fairness in the imposition of tax to Indonesian resident taxpayers for its equity participation in a foreign business entity other than business entities listed on a foreign stock exchange, the Ministry of Finance recently amended the Minister of Finance Regulation No. 107/PMK.03/2017 (“2017 CFC Rules“) by issuing the Minister of Finance Regulation No. 93/PMK.03/2019 on Controlled Foreign Company (CFC) Rules (“New CFC Rules“). The New CFC Rules will apply for the 2019 fiscal year.

The New CFC Rules reflects the exclusion of active income and provides a definition for ‘certain income’ (penghasilan tertentu) from the calculation of deemed dividends for a directly and indirectly owned CFC, which includes:

Further, the New CFC Rules provides a new guidance to determine the basis for deemed dividends, which is the net profits after tax on certain income and is calculated as follows:

the costs of obtaining, collecting and maintaining certain income

the portion of income tax payable, paid or withheld on certain income

We note that the remaining provisions under the 2017 CFC Rules remain effective, including the imposition of deemed dividends from an indirectly owned CFC. 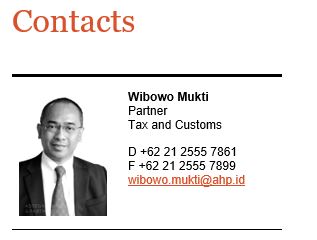